As of October 19, hole AMT19-01 had reached a depth of 658m. Magnetite mineralization was intersected at approximately 479 meters depth and continues intermittently to at least 577 meters depth (crews are continuing to log). The magnetite is disseminated and occurs in millimeter-scale veinlets (see photos below). Its appearance at 479 meters closely corresponds to the predicted start of the modeled anomalous zone (the start of the zone was predicted at 441 metres depth by ESSCO) so it appears the magnetite mineralization is the source of the Stargate II geophysical anomaly. 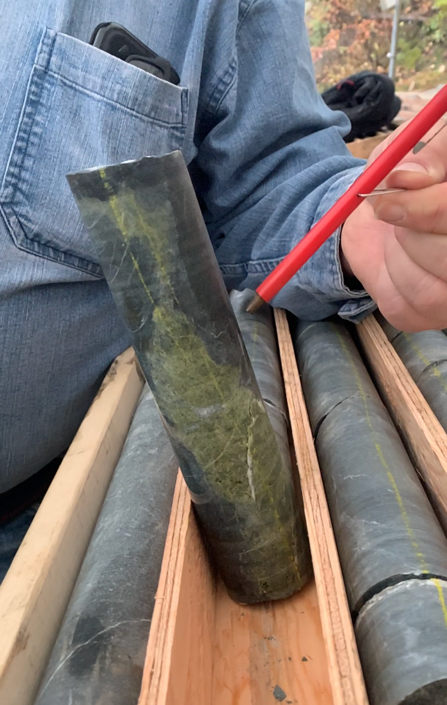 Photos of drill core from AMT19-01 showing pencil magnet deflected by magnetite disseminated in greenstone with epidote alteration and magnetite occurring in veinlets. 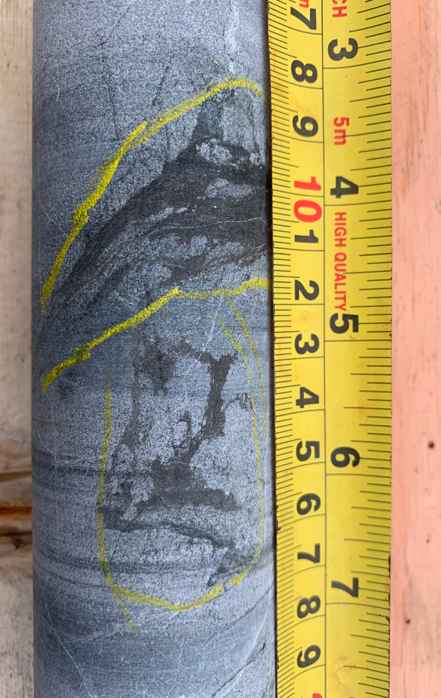 The origin of the magnetite mineralization is unknown at this time. It is too abundant to be an original accessory mineral in the host rocks and its occurrence in veinlets suggests a hydrothermal genesis. Also, patches of epidote-calcite-garnet alteration up to 10 centimeters in length occur throughout the hole, possibly indicative of a skarn-type deposit. Further investigations will be carried out, including geochemical analyses of the core and petrographic studies.

As previously announced in a news release dated July 24, an airborne audio magnetotelluric (AMT) geophysical anomaly was identified on the property by Earth Science Services Corporation of Oshawa, Ontario (ESSCO). The anomaly is interpreted as a pipe-like structure that measures 1834 by 1377 metres in width. For more information, see the video posted on the corporate website.

Ximen retains a 2.5% net smelter return royalty (the “NSR Royalty”) and for nine months after the option requirements were met by GGX Gold retains a right to elect to form a joint venture by paying GGX Gold an amount of money equal to 30% of the total amount expended on the property by GGX Gold. If Ximen exercises this joint-venture right, GGX Gold and Ximen will enter into a joint venture for the exploration and development of the property.