In 2019, Ximen acquired 100% of the former producing Kenville Gold Mine crown granted mineral claims and the surface rights along with all existing permits, infrastructure and equipment. 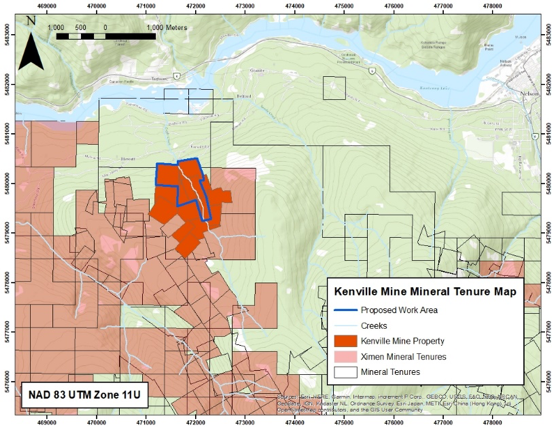 Past drill programs give evidence of the extension of the high‐grade vein structures to substantially higher quantities of Gold on the adjacent claims. Ximen is confident that the current trend likely extends throughout the area, with over half the property unexplored. Ximen’s mission is to exploit the high-grade vein structures with current technology and become a high-grade producing gold mine while concurrently exploring the limits of the reserve. The estimated life expectancy of the mine is 20 + years.

The Company is waiting on final permitting in H2 2021 to develop a new 1200 metre decline and extraction of a 10,000-tonne bulk sample. Once this work gets underway, the Company will move toward extracting a bulk sample for offsite processing.

To date, the 257 Level portal has been restored, surface buildings and roads have been rehabilitated, the portal site for the decline was stripped, a transformer for hydropower supply was installed, and all necessary underground mining equipment including a new mine compressor, a 3-yard scooptram, 13-tonne rock truck, long-tom drills and fans have been acquired. Water and waste rock quality surveys were completed, showing that the mine drainage water is high quality and the waste rock is non-acid generating. The Company intends to be extracting a bulk sample this year and then be in a position to move toward continuous production.

The Kenville Mine (formerly Granite-Poorman Mine) property is located 8 kilometres west of the town of Nelson in the West Kootenay region of British Columbia’s south-eastern interior. The mining property consists of 15 Crown‐granted mineral claims and 3 mineral claims, totalling 567 hectares. All of the Kenville Mine claims are wholly owned. The company also owns surface rights to four of the crown grants.

Ximen considers this historic mineral resource estimate to be relevant and reliable in that it was based upon the results of underground sampling and diamond drill information available at the time. The historic mineral resource estimate uses the categories of Measured, Indicated and Inferred mineral resources as defined by the Canadian Institute of Mining, Metallurgy and Petroleum. Estimations were done using a polygonal method. Measured and Indicated Resources are based on projections of mineralized veins exposed on the 257 Level. Inferred Resources in the historical estimate are based on assumed continuity beyond measured and (or) indicated resources. The inferred mineral resources are based on historical drill and channel assay information verified by underground channel samples collected in 2007/8. The resource tonnages were estimated using an assumed specific gravity. A cut-off grade of 1.1 grams per tonne was used. No allowance for dilution was included based on an anticipated “resue” mining method, which would separate mineralized material from waste rock.

Subsequent to that report, Anglo Swiss drilled several additional diamond drill holes from surface and underground between 2009 and 2012 that intersected multiple gold-quartz veins west and south of the mine
Since acquiring the project, Ximen has been undertaking the work necessary to secure a permit for the development of a new underground decline to access an area west and south of the historic mine where a series of gold-quartz vein intercepts were drilled between 2009 and 2012. Ximen believes this area is a continuation of the gold deposit that was mined historically. Permitting is expected to be completed within the next 8 weeks. Ximen has also rehabilitated the portal to the 257 Level of the Kenville Gold mine to provide access to the area of historic mineral resources that were reported in the 2009 technical report. 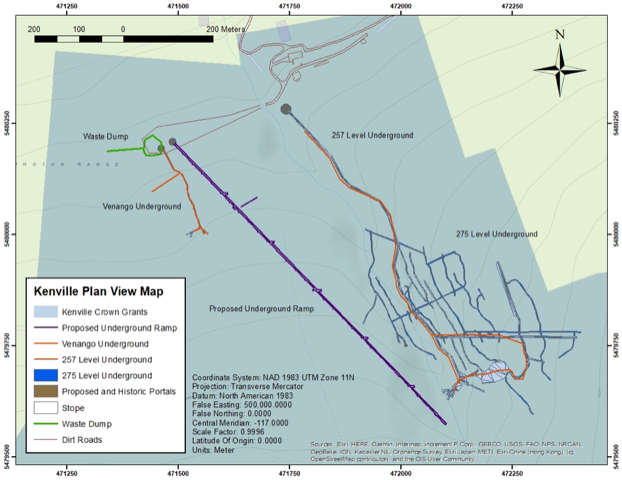 As part of its on-going technical studies on material from the Kenville Gold Mine, Ximen re-sampled and check assayed 13 samples of core from selected drill hole intercepts obtained in the years 2007 to 2011 inclusive. The verification assay results are reported in the Company’s press release dated February 19, 2020. In addition, assays were completed on two composite samples labelled as “High Grade” and “Low grade” that were used for metallurgical testing. Metallurgical test results on these samples were announced in a news release dated May 22, 2020. 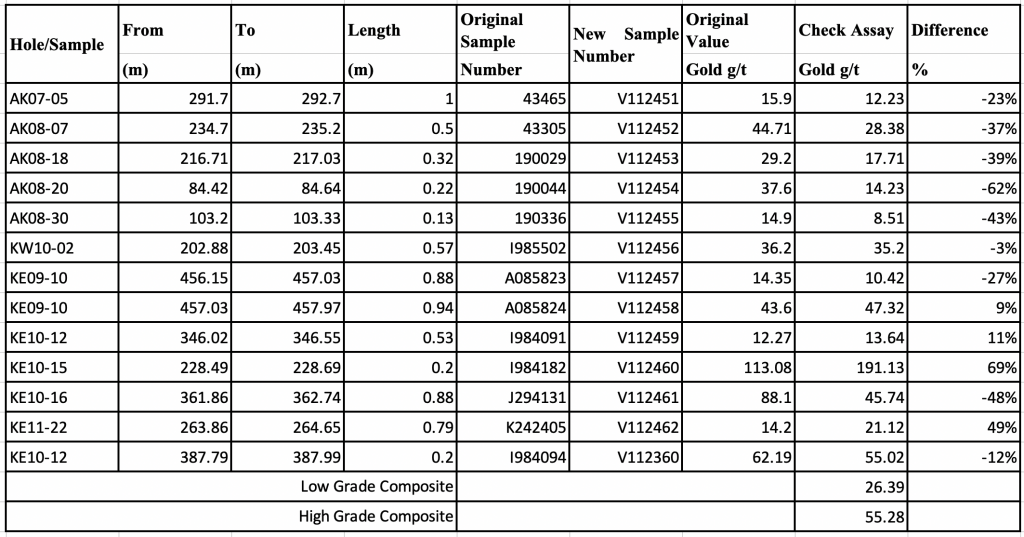 The material was then subjected to gravity gold recovery and flotation testing aimed at approximating the process at the target processing plant. The test process involved the following steps: 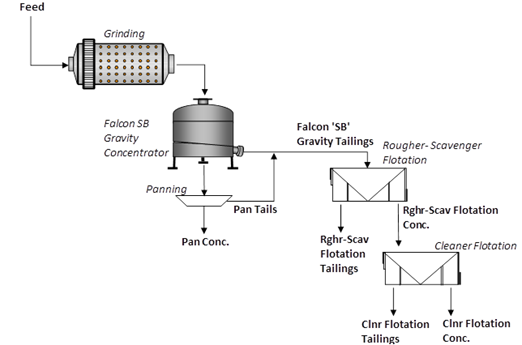 A summary of the test results is given in the following table:

Kenville was the subject of the NI 43-101 Report entitled “Technical (Geological) Report on the 257 Level of the Kenville Gold Mine, Nelson, British Columbia”, dated July 22, 2009, authored by Richard Munroe, FGAC, P.Geo., available on SEDAR under the Gungnir Resources issuer profile (filed October 7, 2009). That report disclosed a measured and indicated resource estimate as shown in the table below.

Following acquisition of the Kenville mine, Ximen proceeded to acquire and option several additional holdings surrounding the Kenville mine in the Nelson area, the most recent of which is the Star property. The total land package amassed to date is 20,062 hectares (including Kenville).

The acquired areas cover numerous historic mines and mineral occurrences and have had extensive historical exploration and small-scale mine production. Ximen will begin exploring this year, with drilling being planned for the Star and California mine properties. Targets include large-tonnage, bulk-mineable gold-copper deposits and small tonnage high-grade gold-silver deposits. 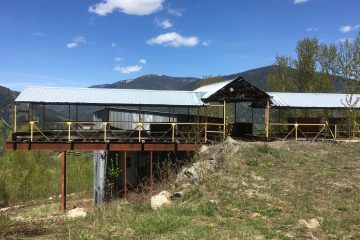 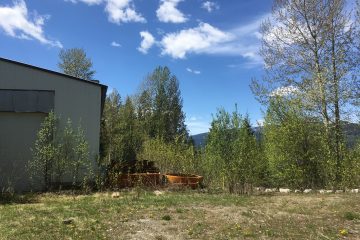 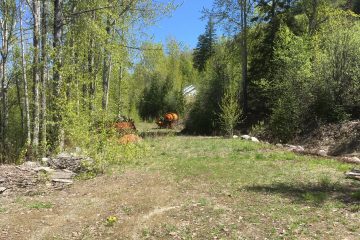 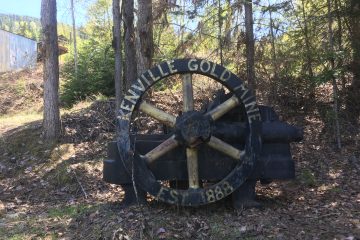 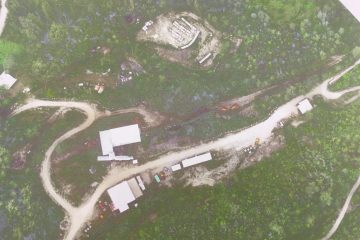 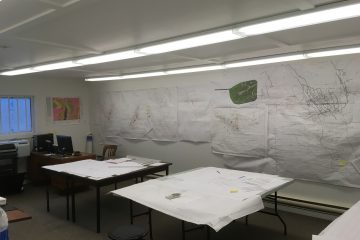 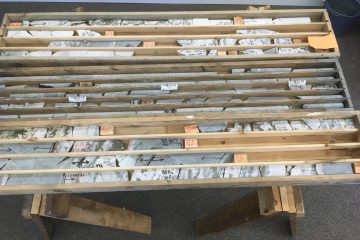 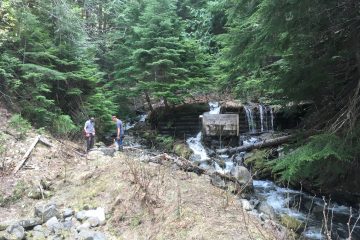 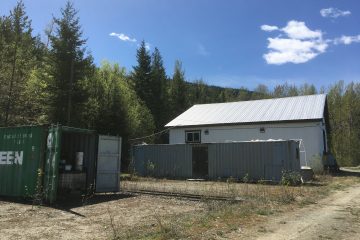 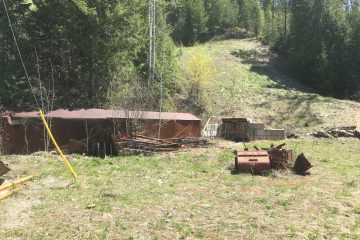 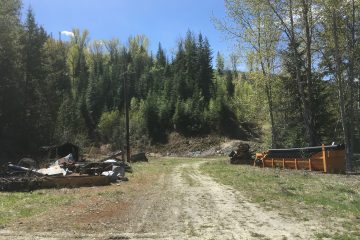 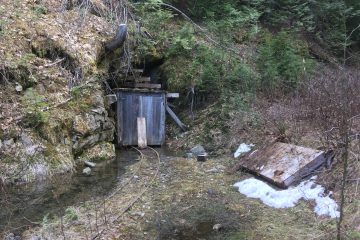 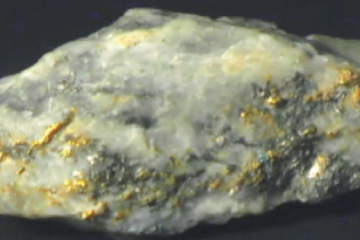 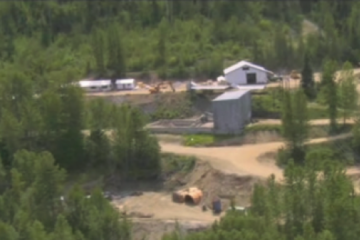 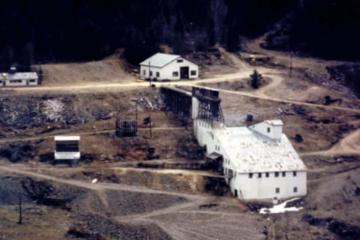