Vancouver, B.C., August 21, 2020 – Ximen Mining Corp. (TSX.v: XIM) (FRA: 1XMA) (OTCQB: XXMMF) (the “Company” or “Ximen”) is pleased to provide the following update on progress at the Kenville Gold Mine project in the Nelson mining camp in southern British Columbia.

Work on the 257 portal continued with excavation of overburden to expose the portal rock face. Timber and steel sets will be installed prior to placement of the new portal steel culvert. Finally, the overburden will be backfilled around the portal culvert. After the new portal has been established, the underground workings will be accessed to verify the 2009 historic resource estimate (described in a previous news release dated April 8, 2019). 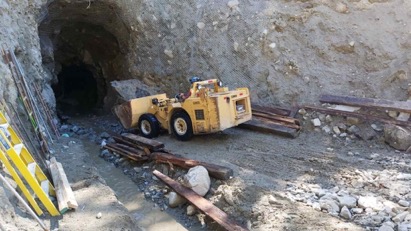 Photo of scooptram at Kenville 257 Portal at final stage of excavation. 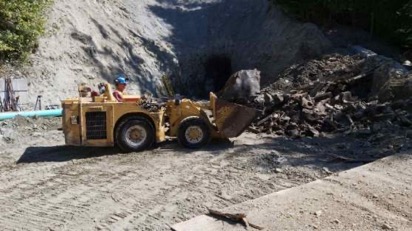 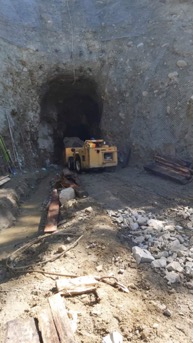 Photo of scooptram at 257 Portal showing screening above portal entrance.

The regulatory authorities reviewed Ximen’s updated permit documents for the new decline and have now requested the Company to initiate public notification under for the Environmental Management Act. A final application will then be submitted that includes a report on the notification process. Approval of the new underground development program is anticipated once this process and other information has been submitted as part of the final submission.

The Company recently received a final report on the metallurgical test work completed by Met-Solve Laboratories Inc of Langley, B.C.

Initially, three samples were combined to form a 51kg composite sample with a predicted gold grade of 17.16 g/t gold based on individual assays of the three samples.

A 10 kg sample was ground to a P80 of 147 μm and then subjected to a single-stage Falcon gravity concentration test. The concentrate was panned and determined to recover 39.3% of the Au at a grade of 11,225 g/t Au. A silver recovery of 8.6% Ag at a grade of 4,577 g/t Ag was achieved. The results indicate that the material is amenable to gravity concentration, primarily for gold recovery, and that a high grade gold concentrate can be produced. A 2 kg subsample of the gravity tailings were subjected to rougher flotation. The rougher flotation test on the gravity tailings achieved an additional overall gold recovery of 59.7% and an additional silver recovery of 86.4% in a mass yield of 15.0%.

The combined gravity-flotation recoveries were 99.0% Au and 95.0% Ag respectively.

The combined recovery of the gravity-rougher flotation test was 98.9% Au and 87.8% Ag in 16.4% of the mass at concentrate grade of 83.6 g/t Au and 150.1 g/t Ag. The cleaning efficiency, gained by simply diluting the flotation pulp to between 11% and 14% solids, was respectable as minimal gold loss occurred between cleaning stages. Overall, the rougher concentrate was upgraded from 40.3 g/t Au and 132.9 g.t Ag to 86.5 g/t Au and 255.0 g/t Ag. Combined with the rougher flotation results achieved from the first test, there is a strong indication that a much higher cleaner flotation concentrate grade may be generated; further flotation testing on a larger subsample of the gravity tailings is recommended.

Acid-base accounting (ABA) analysis of the final tailings of the Rougher-Cleaner Flotation test showed a low Acid Producing AP value of 1.6. This is attributed to the removal of the majority of sulfides through flotation, significantly lowering its acid generating potential. The Net Neutralization Potential (NNP) and Neutralization Potential Ratio (NPR) values of the process tailings (117.5 and 76.2, respectively) indicate that it is non-acid producing.

The metallurgical test results demonstrate that material from Ximen’s Kenville mine is amenable to gravity-flotation processing at a facility such as the nearby Greenwood mill of Golden Dawn Minerals Inc. The Acid-base accounting results indicate the final tailings will not be acid generating.

For the metallurgical work, gold and silver concentrations were determined by MSA Labs of Langley, B.C. by the Fire Assay method using a 30 gram fusion and either AAS or gravimetric finish, or by peroxide fusion using an ICP-ES finish. Internal standards, blanks and duplicates were used to monitor quality control.
Dr. Mathew Ball, P.Geo., VP Exploration for Ximen Mining Corp. and a Qualified Person as defined by NI 43-101, approved the technical information contained in this News Release.