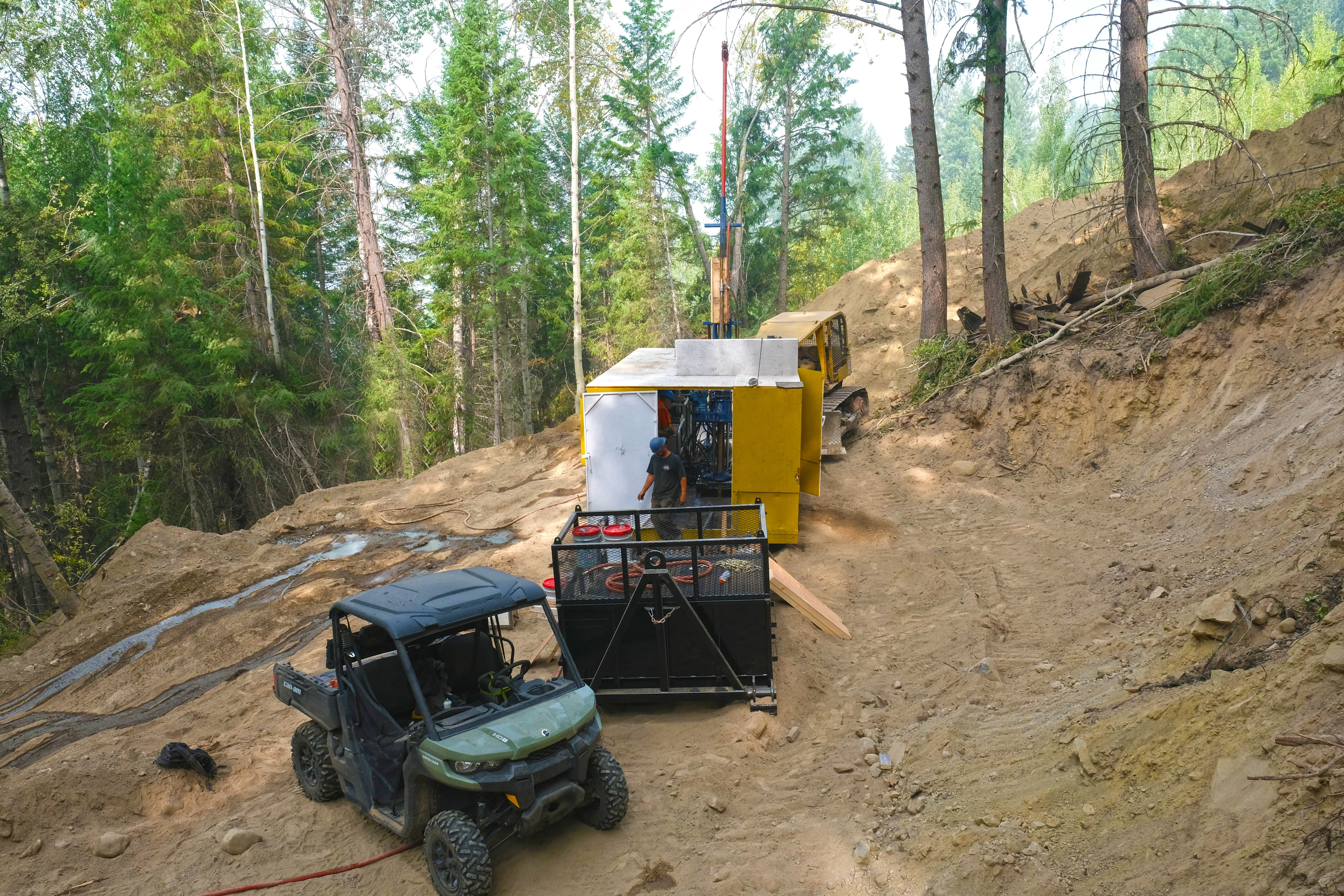 “ Ximen Mining has amassed a significant amount of Precious Metals properties in southern BC and has now positioned itself to be among one of the largest land holders of premium Precious metals exploration properties in southern BC. Ximen also owns all of these assets 100% and is not beholden to any property payments. Ximen has also obtained 100% ownership of surface rights and land holdings in key areas strategic to the advancement of our operations.

So while we are pleased with the progress and continue to address the new regulatory obligations that are essential to continue focusing on the advancement of the Kernville Gold Mine towards production, it is important that we also address the blue sky potential of the prolific precious metals assets we have assembled in the Company. Hence we have been busy on serval fronts and now will commence drilling on several projects the Providence being one of the first. “
States Anderson , CEO Ximen Mining Corp/ 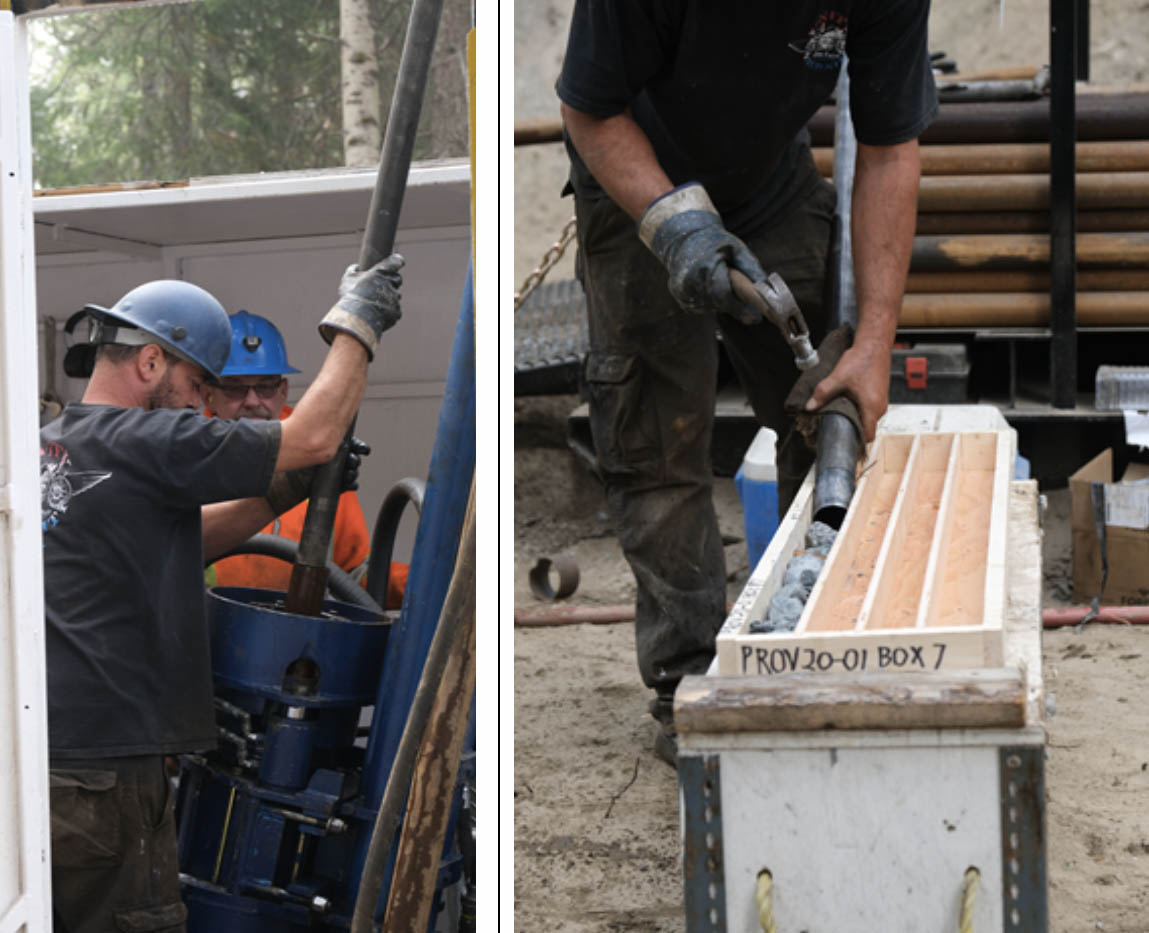 To follow-up on groundwork conducted earlier this field season, Ximen has started its drilling and trenching program aiming at two targets on the Providence property. The first target is an historic mine adit, where a polymetallic silver-gold vein was mined historically. An excavator is being used to expose the mine entrance (see photos below). Ximen previously obtained an assay of 3.87 g/t gold and 100 g/t silver from vein material sampled from the waste dump. This could be a strike continuation of the main historic Providence mine. Minfile records indicate 1,368,075 ounces of silver, 5,896 ounces of gold, 402,690 pounds lead and 260,086 pounds of zinc were recovered from the Providence mine from 10,426 tonnes mined. Using these figures, the calculated precious metal grades would be 4,081 g/t silver (119 ounces per ton) and 17.6 g/t gold (0.51 ounces per tonne). 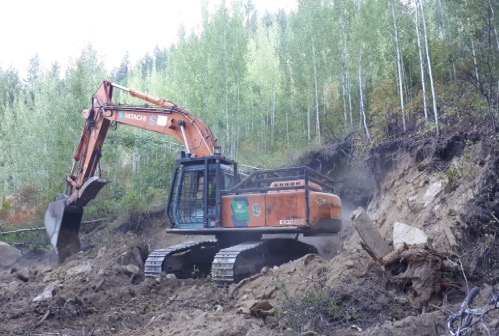 Providence Target No. 1: Photo of excavator trenching historic mine entrance.

The second target is aimed at a showing of massive sulphide vein or skarn mineralization for which a previous grab sample assayed 0.23% copper and 3.4 g/t silver. There is an historic shaft on this zone. 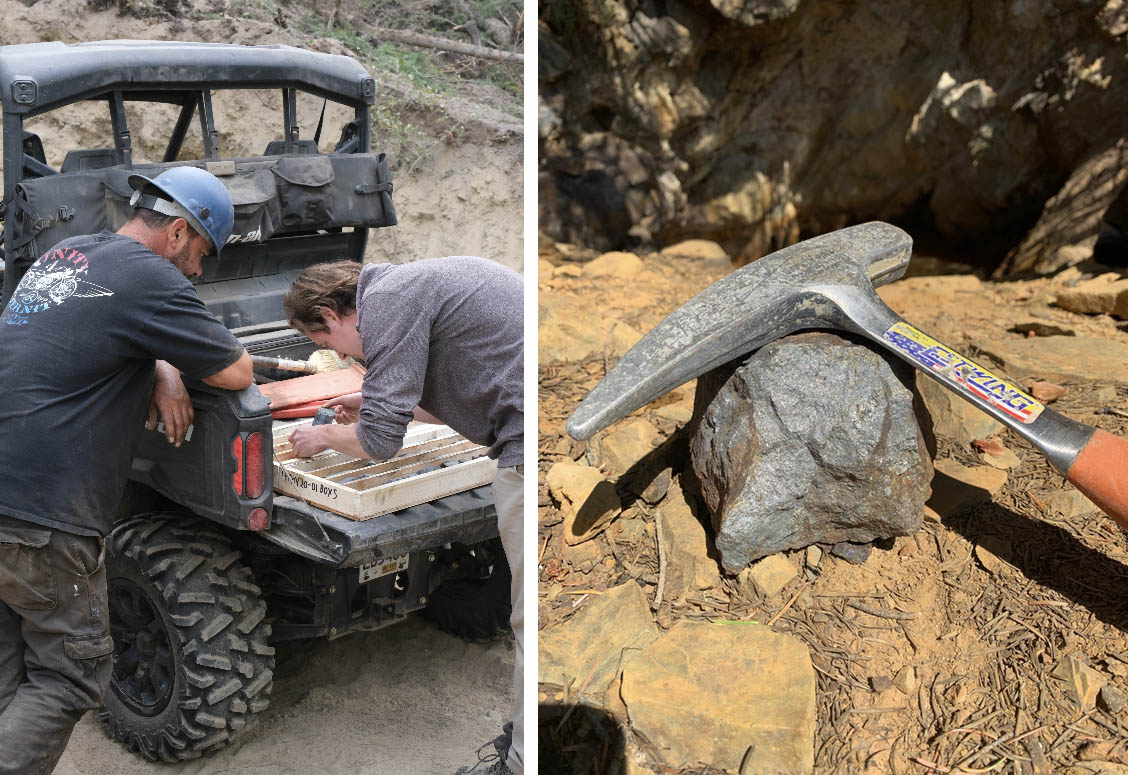 Prospecting was also done in other areas of the claims earlier this field season with rock chip samples collected from historic mine dumps and rusty, altered outcrops. Assay results for these samples are pending.

Elsewhere in the Greenwood area, prospecting and rock chip sampling were done at the Bud-Elk and Amelia properties. At Bud-Elk, altered rocks containing up to 5% disseminated pyrite and chalcopyrite were sampled to verify results reported by previous operators. Pending favourable results, drilling will be planned for next season. At Amelia, field work included visiting sites of historic underground workings and grab sampling dumps or scattered quartz vein material at reclaimed sites. Mineralized samples consisted of quartz containing pyrite and chalcopyrite, or galena were collected for assay (results pending). A 3D mine model was created, which formed the basis for design of a surface drilling program designed to test for extensions of the Caribou Amelia mine.

Analyses disclosed in this release were conducted by ALS Global – Geochemistry Analytical Lab in North Vancouver, BC, Canada. ALS is an independent, fully accredited commercial laboratory. Gold was determined by the fire assay method using a 50 gram sample weight. Other metals were analyzed as part of a 33-element package using a four acid digestion and determination by ICP-AES.

The Company has granted 2,000,000 stock options at an exercise price of $0.50 to its directors, officers, employees and consultants. The options are exercisable for five years and will be cancelled 30 days after cessation of acting as director, officer, employee or consultant of the Company. The stock options are not transferable and will be subject to a four-month hold period from the date of grant and any applicable regulatory acceptance.