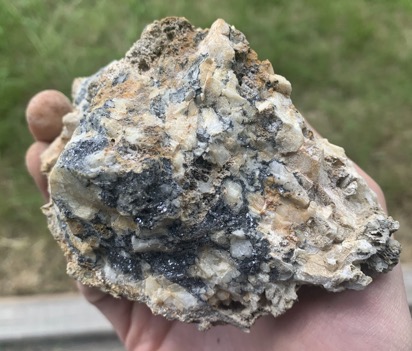 Photo of sample from the Fontenoy claim showing abundant galena.

Assay results were received recently from prospecting and geological work done earlier this season at the Company’s Amelia property. Results for a total of 34 rock chip grab samples were received. Ten of the samples returned significant gold results, three of which also retuned significant silver results (see table below). 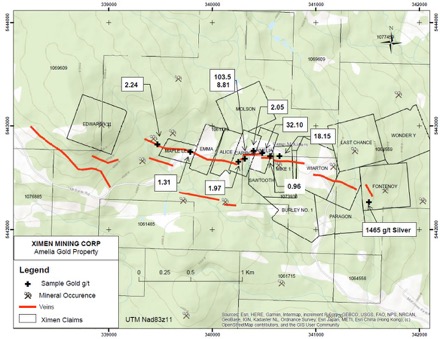 The highest gold results were from the historic Cariboo-Amelia mine site from dump samples of quartz vein material mineralized with pyrite, chalcopyrite and sphalerite, and host rock argillite containing up to 40% disseminated fine-grained pyrite (see photos below).

Photos of vein samples from Cariboo-Amelia mine dumps, with pyrite, chalcopyrite and sphalerite mineralization 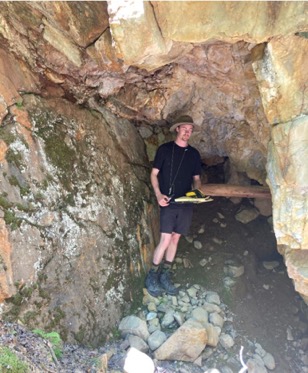 Photo of geologist in the historic Cariboo Amelia mine workings on Cariboo claim.

A sample from an historic dump on the Fontenoy claim assayed 1465 g/t silver. This sample consists of quartz carbonate and clay containing 20% galena (see photo below). The Fontenoy is situated almost one kilometer east from the historic Cariboo-Amelia mine and is likely a separate vein system.

A sample collected on the western side of the area from the historic Eureka mine dump assayed 2.24 g/t gold. The Eureka mine is situated a kilometer west of the Cariboo-Amelia mine on what is thought to be a continuation of the Cariboo vein. A considerable amount of vein material was removed from the Eureka occurrence, although there are no known production records (BC Minfile). 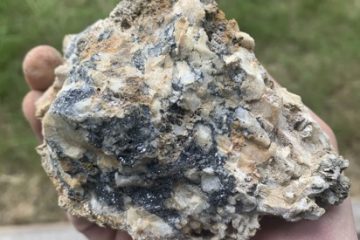