The Company deployed one drill rig for in-fill drilling on the C.O.D. vein to explore the vein between and below the significant intercepts obtained last year.  The highlights of the 2018 diamond drilling program were drill holes COD18-67 and COD18-70 that intersected near-surface, high-grade gold, silver and tellurium in a newly discovered southern extension of the C.O.D vein. Highlights from 2018 include include the following intercepts: 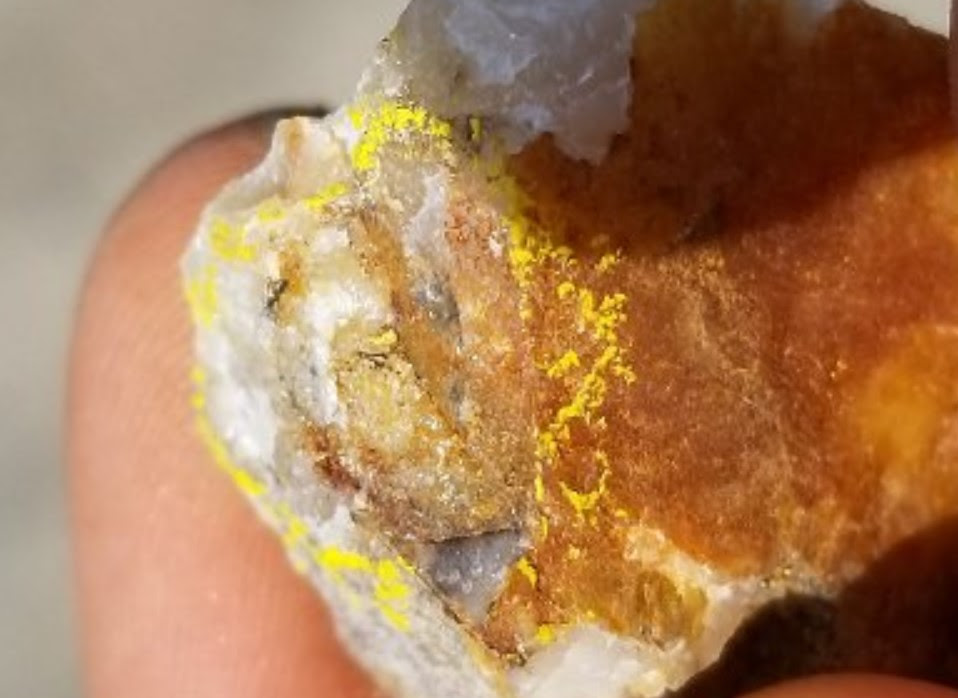 Photo of piece of core from Hole 2019-19 containing visible gold in rusty quartz.

Since the start of the season in mid-April, 20 holes have been completed for a total of 1217 meters cored. Ten holes intersected the C.O.D. quartz vein at their target depths, of which eight vein intercepts were visibly mineralized with pyrite.  Two of the intercepts also contained possible telluride mineralization and one intercept contained visible gold (see attached photo). In the C.O.D. vein, elevated silver, gold and tellurium values are associated with a silver-grey mineral thought to be the telluride mineral named sylvanite, which has the formula (Ag,Au)Te2.

The drill core is currently being logged and cut in half with a diamond saw at GGX’s facility in Greenwood, B.C.  Half core samples will be shipped for assay early in June.

Further exploratory drilling is also being planned to test the southern extension of the C.O.D. vein, the Everest vein that was discovered in 2018, and on the C.O.D. North vein.  The Gold Drop mine is also a target for further exploration.