Vancouver, B.C., July 24 2020 – Ximen Mining Corp. (TSX.v: XIM) (FRA: 1XMA) (OTCQB: XXMMF) (the “Company” or “Ximen”) is pleased to announce that it recently added to its land holdings in the Greenwood mining district.

The Company continued to acquire additional mineral properties throughout the past two months and recently staked additional claims. Three mineral claims were recently acquired that adjoin Ximen’s Amelia gold mine property. One claim (42.3 Hectares) was purchased from an individual on the west side of the Amelia property and 2 claims (1500.7 Hectares) were acquired through the BC mineral tenure online system. The claims also adjoin the Amelia property and connect to Ximen’s main group of Greenwood claims. 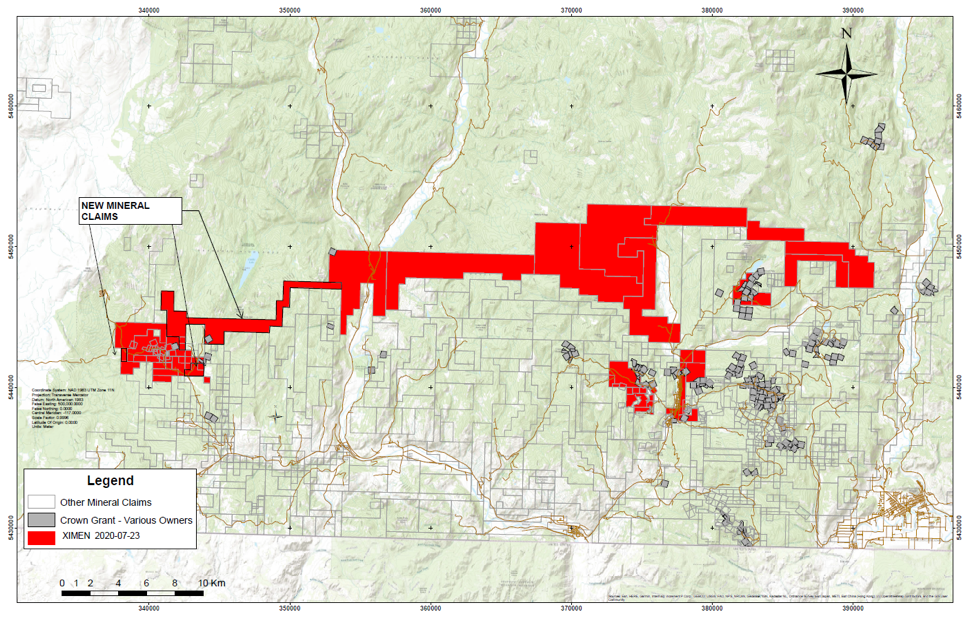 The new claims cover several mineral occurrences, including Pictou, Stan, Elk, Ho and Jolly Creek Chrome. The Pictou covers a 6m wide shear zone from which values up to 209 grams per tonne silver have been obtained historically, according to the BC Minfile.

The company also wishes to announce that it recently closed the private placement previously announced on June 19, 2020 for gross proceeds of $2,000,000. The non-brokered private placement consisted of 4,444,444 million units at a price of $0.45 per unit. Each Unit consists of one common share and one transferable common share purchase warrant. Each whole warrant will entitle the holder to purchase, for a period of 24 months from the date of issue, one additional common share of the Issuer at an exercise price of $0.75 per share.

The net proceeds from the Offering will be used by the Company for exploration expenses on the Company’s British Columbia mineral properties and general working capital.