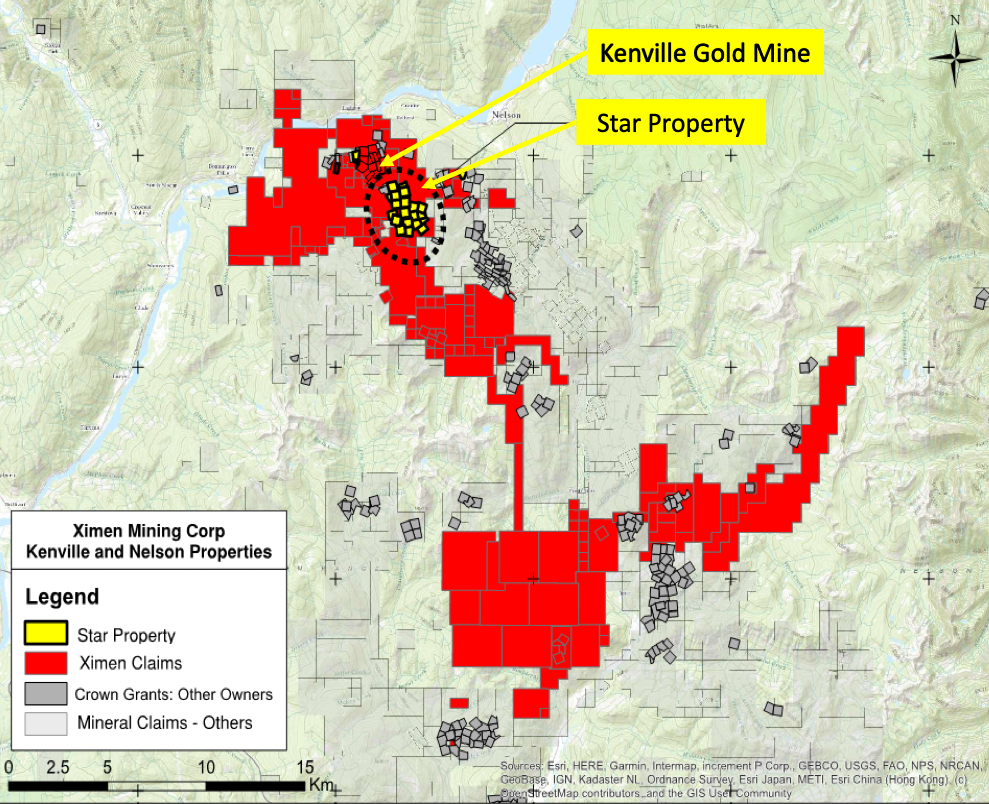 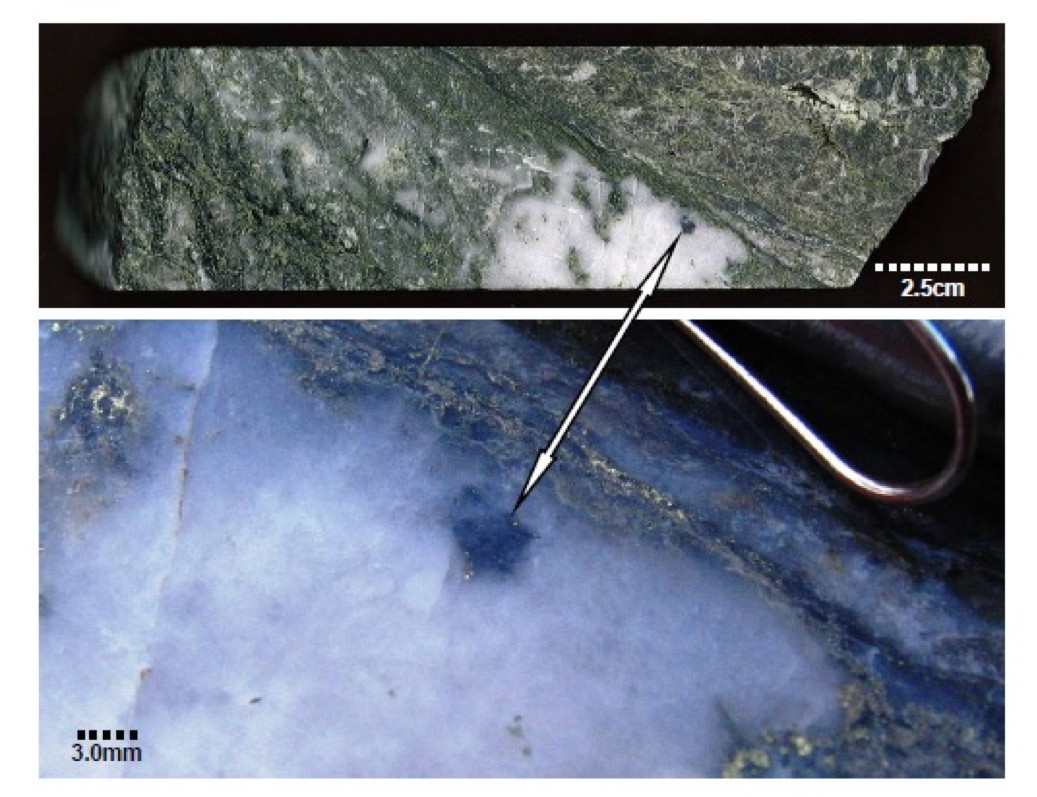 Ximen believes the group of Star claims located south of the Kenville mine is one of the key properties in the Nelson camp. This claim group straddles the margin of the Eagle Creek pluton, which hosts the high-grade gold-quartz veins at Ximen’s Kenville property. On the Star ground, widespread disseminated mineralization occurs over a south-southeast trending zone approximately two kilometres in strike length and one half to one kilometre wide. Mineralization includes fracture-controlled pyrite, chalcopyrite and other copper sulfides and oxides, specular hematite and local molybdenite. The best mineralized intercepts occur in steeply dipping zones that are 50 metres or more in width but in some areas, mineralization extends over entire hole lengths (100 metres or more). The gold-silver-copper mineralization is associated with potassic alteration (orthoclase and carbonate), which signifies genesis by a porphyry-type system. As such, this property has excellent potential for a large-tonnage, low-grade gold deposit.

The property has been held since the 1950’s when underground development was done at the historic Eureka mine to test high-grade copper-silver bearing fracture zones. Between 1984 and 1988, soil geochemical surveys, geophysical surveys (IP and magnetic) and drilling were done (rotary reverse circulation and core drilling). From 1989 through 1992 the property was further tested. In 1990, three zones were trenched at the Star claim and copper-gold mineralization was traced over an area of 800 by 200 metres, which was then tested by 26 diamond drill holes totalling 5880 metres. Between 2008 and 2011 aerial geophysical surveys and fifteen more holes were drilled. Significant drill intercepts from historic data are listed below. 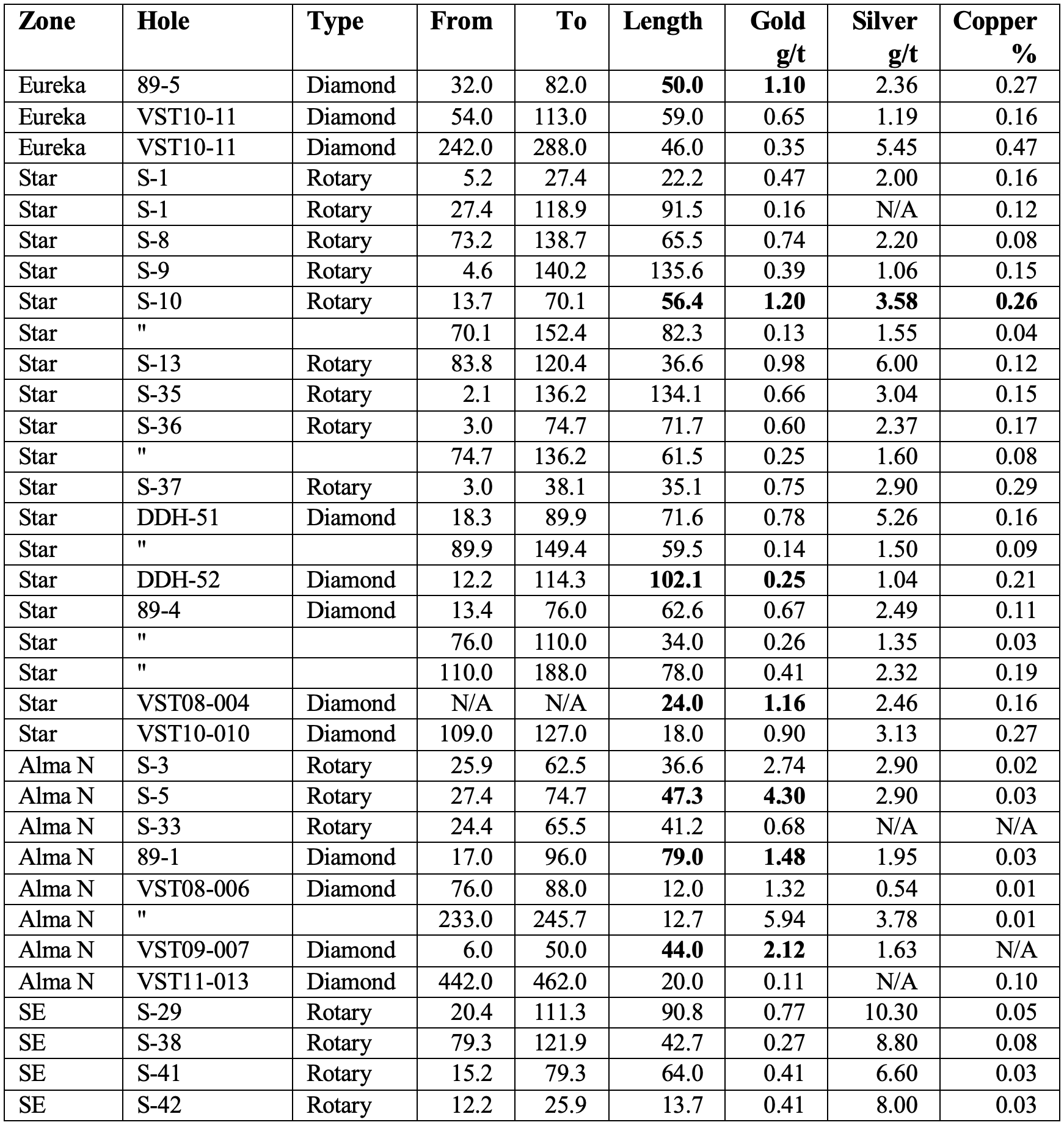 According to the terms of the Option Agreement, to acquire 100% interest in the properties Ximen is required to pay the vendors a total of $400,000 over nine years in scheduled varying payments and do work on the property for expenditures totalling $1,000,000 over 10 years in scheduled varying annual increments. The payments and work expenditures can be accelerated. The acquisition is subject to a 2.5% NSR royalty in favour of the vendors that can be reduced to 1.5% by payment of $2,000,000.