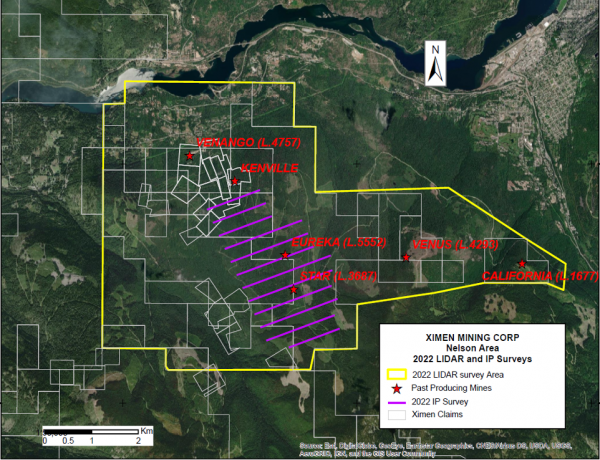 A total of 36.4 square kilometers were flown, with LIDAR and orthophoto data collected with a Phoenix Ranger Lidar scanner via a manned helicopter.  The LIDAR survey was flown over the northern part of Ximen’s Nelson property and covered the Kenville, Star, Venus – Juno, and California properties.  These properties cover historic gold mines with production listed in the table below.

At the Kenville gold mine, Ximen is in the permitting stage for underground development.  Drilling on the property between 2008 and 2012 identified several new gold-bearing veins in widely spaced drill holes.  Detailed drilling is required to adequately define the veins and grade continuity.  Given the depth from surface, in-fill drilling is best done from underground mine workings. New underground development is therefore being permitted that will access the new vein extensions.

The Venus-Juno mine is being permitted for surface drilling by Ximen to test for vein extensions.  A grab sample of mineralized quartz collected on the property by Ximen in 2020 contained 9.04 grams per tonne gold, 72.8 grams per tonne silver and 1.27% copper (news release dated February 12, 2021).

The California mine has been permitted by Ximen for surface drilling.   The drilling is designed to test an area of the California vein above the historic mine level No. 3 where historic sampling indicates the vein averages 25.57 grams per tonne gold over a length of 91 meters with vein widths of 0.9 to 1.5 meters (BC Mines Annual Report for 1919).  There are five additional gold-bearing veins in the area, including the Deadwood, Union, Creek, Cabin and the Exchequer veins.  Outcrop of the California vein was sampled in 2020 and found to contain 8.4 grams per tonne gold (news release dated March 09, 2021).

The Eureka and Star mines occur in a broad area of vein-hosted and disseminated gold-copper mineralization.  Numerous geological, geochemical, and geophysical surveys were completed in this area that identified several exploration targets.  A total of 94 diamond drill and reverse circulation holes (15,741 metres) were drilled between 1933 and 2011 that resulted in significant gold-copper intercepts, indicating potential for a bulk-mineable deposit. Ximen has applied for a permit to do surface drilling and is actively exploring this area with geochemical surveys and a modern Induced Polarization/Resistivity geophysical survey.  An exploration camp is also being prepared for use during the next drill season.  The 2022 LIDAR survey results will be used to provide a detailed topographic base and to help identify fault structures. 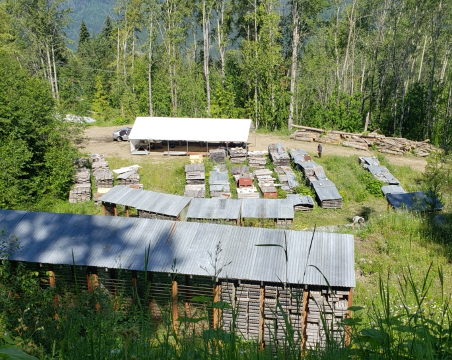 Technical disclosure in this news release has been approved by Dr. Mathew Ball, P.Geo., a Qualified Person as defined by National Instrument 43-101 and VP Exploration for Ximen Mining Corp.