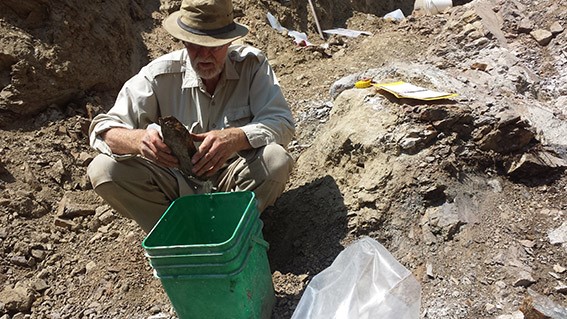 The Treasure Mountain Silver Property covers 10,700 hectares of geologically prospective ground adjacent to Nicola Mining Inc.’s Treasure Mountain Property (site of the historic Treasure Mountain Silver-Lead-Zinc mine). The Treasure Mountain Silver Property hosts at least seven gold, silver, lead, zinc and / or copper B.C. MINFILE occurrences in various regions. These include gold-quartz vein, polymetallic veins and porphyry type showings. Some of these mineral occurrences have associated historic underground workings. The Property occurs within the Intermontane Terrane, which hosts numerous porphyry copper deposits.
For 2019, the Company obtained a permit to conduct diamond drilling and trenching on the Property. New Destiny has selected three target areas to follow-up on previous exploration with trenching and drilling. New Destiny has begun mobilizing equipment and has commenced the clearing of trench sites and construction of drill pads.

The work program will consist of trenching and rock sampling in target areas selected from previous programs, followed by diamond drilling in selected areas. The targets include areas of soil / rock geochemical anomalies identified during previous work programs on the property. One target area is located in the east region of the property in the Vuich Creek area, where a porphyritic dyke sample returned 8.81 grams per tonne Gold. Other samples in this area were also anomalous for copper.

New Destiny identified a new target area during 2018 in the northeast region of the Property, where rock samples from an old mine on Jim Kelly Creek assayed 11.3 grams per tonne gold. Another priority area is at Railroad Creek, where rock geochemical anomalies for copper (8940 ppm Cu) were identified during last year’s field program.

Analytical results reported above were performed by ALS Laboratories in North Vancouver, BC., which is an independent and accredited commercial laboratory. Analyses for gold were done by fire assay with AA finish on 50 gram subsamples. Analyses for copper was by four acid digestion with ICP-MS finish.