Seven claims covering approximately 693 hectares were acquired this week in the Nelson Mining Camp. One block of 2 claims surrounds the Company’s Queen Victoria historic mine, located about 5 kilometers northwest of the Kenville mine. A second block of 5 claims adjoins the east boundary of the Company’s Kenville gold mine property.

The Queen Victoria copper-gold-silver skarn deposit was mined between 1907 and 1956 and produced 1.48 million pounds of copper (673 tonnes), 30,544 ounces of silver, and 246 ounces of gold. The new claims also cover three crown granted claims that reverted.

The eastern block of claims covers five reverted crown grants and the Mor 1 mineral occurrence. In addition, the Oro Fino occurrence lies on the boundary between the newly acquired claims and existing Ximen property. At Oro Fino, known mineralization is similar to that of the Kenville mine: quartz veins with pyrite, chalcopyrite, galena, sphalerite and free gold, so it appears that the Kenville vein system continues into this area. The Mor 1 occurrence is located 1 km southeast of the Kenville mine. Known mineralization there consists of disseminated pyrite with minor chalcopyrite in diorite and pyrite and chalcopyrite in narrow quartz veins up to 30 centimetres in width, indicating potential for bulk-mineable and lode gold deposits.

The total land package assembled by Ximen in the Nelson-Ymir-Salmo area since first acquiring the Kenville gold mine now stands at 19,582 hectares. Earlier this year, properties were acquired from Emgold Mining Corporation, Klondike Gold Corp. and 49er Creek Gold Corp. 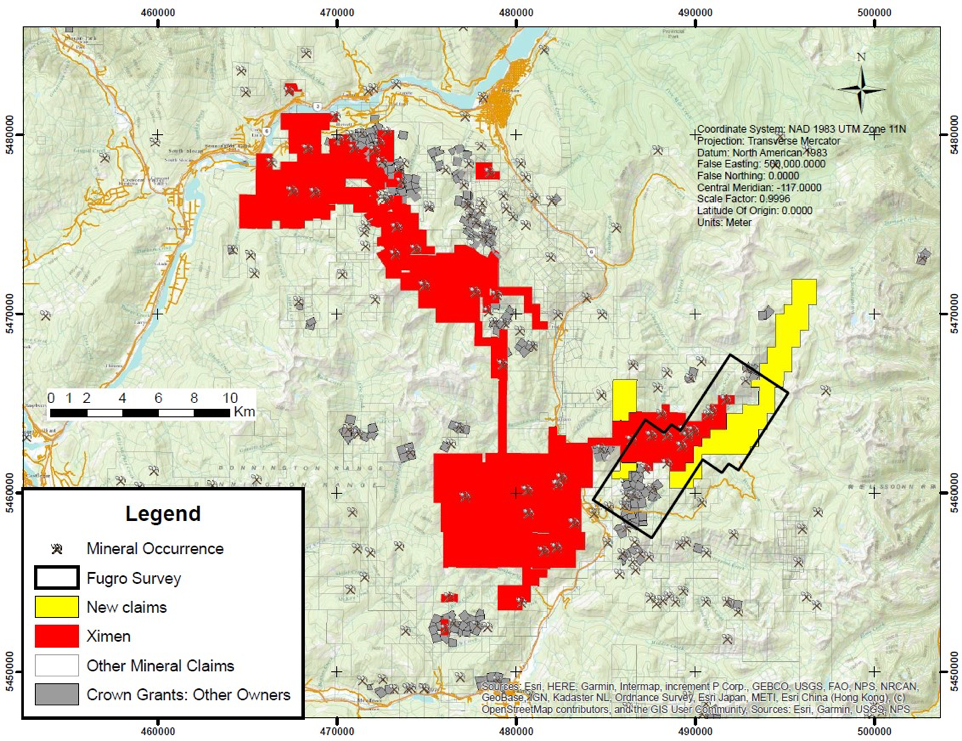 The Company is also pleased to announce that it has arranged a non-brokered private placement of 4,444,444 million units at a price of $0.45 per unit for gross proceeds of $2,000,000. Each Unit consists of one common share and one transferable common share purchase warrant. Each whole warrant will entitle the holder to purchase, for a period of 24 months from the date of issue, one additional common share of the Issuer at an exercise price of $0.75 per share.
Directors, officers or other insiders of the Company may participate in the foregoing offerings, and such parties may sell securities of the Company owned or controlled by them personally through the facilities of the TSX Venture Exchange to finance participation in such offerings. There is no material fact or material change of the Company that has not been generally disclosed. A finder’s fee may be paid to eligible finders in accordance to the TSX Venture Exchange policies. All securities issued pursuant to the offering will be subject to a hold period of four months and one day from the date of closing. The offering and payment of finders’ fees are both subject to approval by the TSX-V.

Subject to certain limitations, the financing is open to all existing shareholders of the Company as at June 18, 2020, in reliance on the existing shareholder exemption pursuant to B.C. Instrument 45-534. The aggregate acquisition cost to a subscriber under the existing shareholder exemption cannot exceed $15,000 unless the subscriber has obtained advice from a registered investment dealer regarding the suitability of investment. In addition, other investors who qualify under available prospectus exemptions will be allowed to participate in the financing. Existing shareholders of the Company are directed to contact the Company for further information.
The net proceeds from the Offering will be used by the Company for exploration expenses on the Company’s British Columbia mineral properties and general working capital.
Dr. Mathew Ball, P.Geo., VP Exploration for Ximen Mining Corp. and a Qualified Person as defined by NI 43-101, approved the technical information contained in this News Release.