Vancouver, B.C., June 28, 2020 – Ximen Mining Corp. (TSX.v: XIM) (FRA: 1XMA) (OTCQB: XXMMF) (the “Company” or “Ximen”) is pleased to provide an update on its Amelia Gold Mine project near Mt. Baldy in southern British Columbia. The Amelia property has excellent potential for gold resources within trucking distance of a gold processing facility at Greenwood, B.C.

Prospecting and mapping of the Amelia Gold property has started, with the aim of generating new targets for trenching and drilling that will be used for permitting for drilling later this season. Field work involves detailed prospecting and mapping to evaluate all the known and unrecorded mineral occurrences and seek out new mineralization. The majority of the Amelia Property is under-explored by modern methods, and there is excellent potential to define gold resources on the Cariboo-Amelia vein below the historical mine workings and along strike of the historic mining area. Aside from the main Cariboo-Amelia vein, there are parallel vein structures that have not been adequately examined or evaluated. There are also other near surface targets that can be tested using geochemistry and trenching. Exploration drilling will be designed to define and outline mineral resources near-surface initially, then test below the historical mine workings, and finally test along strike and parallel to the Cariboo-Amelia vein. Geochemical surveys will be done to the west of the past surveys to identify new targets.
There is even a possibility of finding lost gold bars! (see “Lost Bonanzas of Western Canada”, Garnet Basque, ed., 2006).

The claim group is easily accessible by a network of paved and all-weather gravel roads. The area has exceptional infrastructure available to enhance the rapid development of mineral deposits, including natural gas pipelines and high-voltage hydroelectric transmission lines that cross the property. 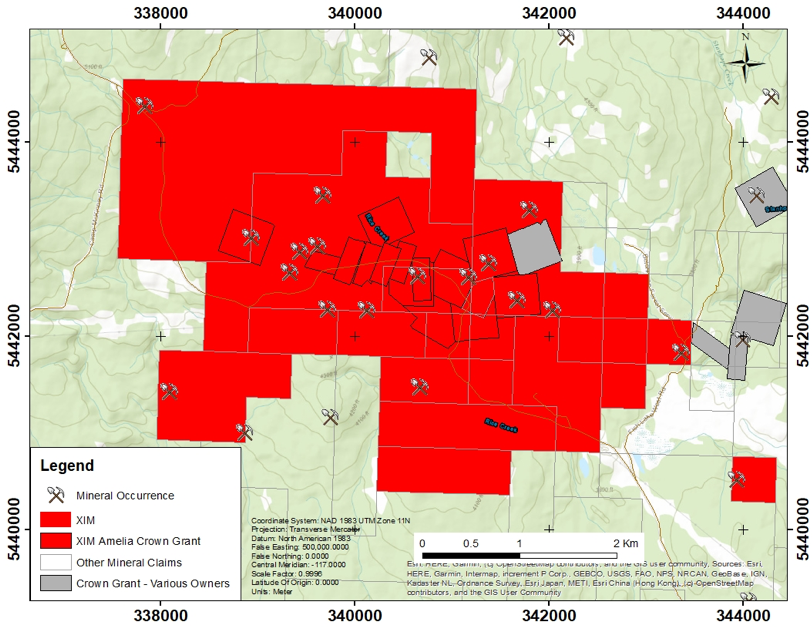 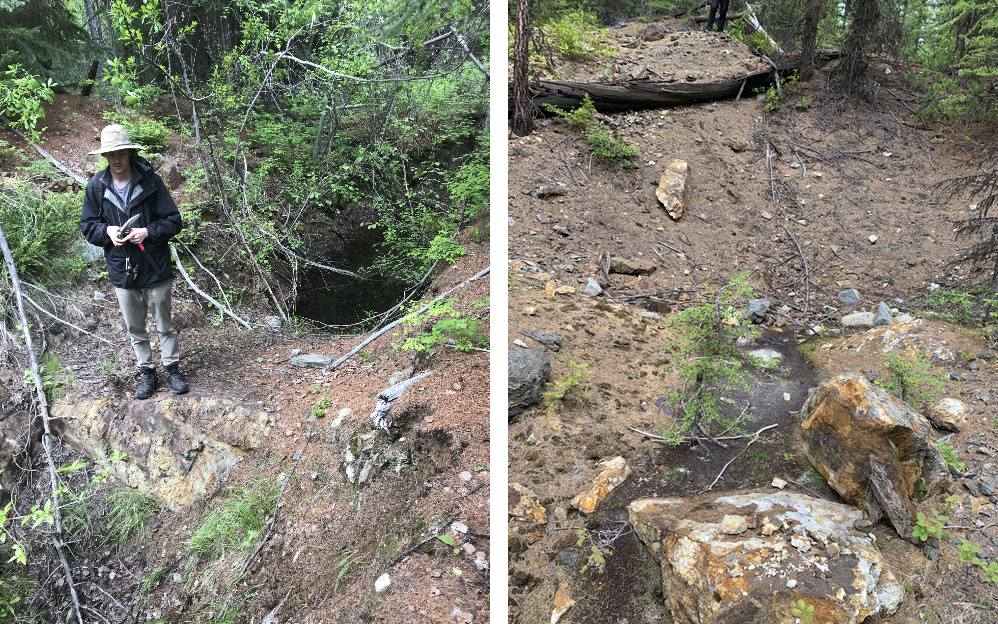 Photos from 2020 prospecting at the Amelia property showing old mine workings and outcropping gold-quartz vein.

The Amelia Gold Property has a long history of mining and exploration dating back to the late 1800’s. The general area, originally known as Camp McKinney, is host to fifteen known polymetallic and precious metal quartz vein, skarn and placer mineral occurrences on the property. The Cariboo-Amelia produced 124,452 tonnes ore, of which 112,254 tonnes was milled on-site for recovery of 81,602 ounces of gold, 32,439 ounces of silver, 113,302 pounds of lead and 198,140 pounds of zinc. The average recovered gold grade was 24.68 grams per tonne gold. The historical record of the property is summarized below.

1980 to 1986 Geophysical and geochemical surveys were competed over the Sailor and Minnie Ha-Ha claims, and 4 diamond drill holes were completed on the Anarchist claim, and geological and geophysical surveys, trenching and rock sampling were done at the Cariboo-Amelia mine
1987 A surface-drilling program (600 meters) was done at the Cariboo-Amelia Mine to locate the eastern extension of the Cariboo vein. The program discovered a vein on the Wiarton crown grant.
2002 – 2003 Biogeochemical bark surveys were done south and east of the Cariboo-Amelia Mine encompassing the eastern extension of the Minnie-Ha-Ha vein. Anomalies were generated and tested by trenching.
Geologically, the Amelia Gold Property is underlain by interbedded Carboniferous to Permian age Anarchist Group metasediments including calcareous and argillaceous quartzite, greywacke, limestone and locally micaceous quartzite and calcareous biotite schist with minor associated metavolcanics. An ultramafic lens is also exposed nearby. Granite and granodiorite of the Middle Jurassic age Nelson intrusions have intruded the Anarchist Group to the west and south as small stocks and plugs. The quartz veins on the Amelia property have structural and textural similarities to mesothermal veins, which typically have great vertical extents. Given the regional distribution of extensional structures and epithermal mineral deposits, there is also a possibility of epithermal mineralization in the area.
The Cariboo-Amelia mineral deposit system is defined by a number of different gold-bearing quartz veins that are scattered throughout the property and nearby claims. In general, the ore deposit strikes east-west with sub-vertical to steep southerly dips. The mineralized system has a complex deformational history with a number of different generations of extensional block-faults that cut and offset the vein.
The figure below is a longitudinal vertical section from the historical records of the Cariboo-Amelia mine showing new drill target areas. 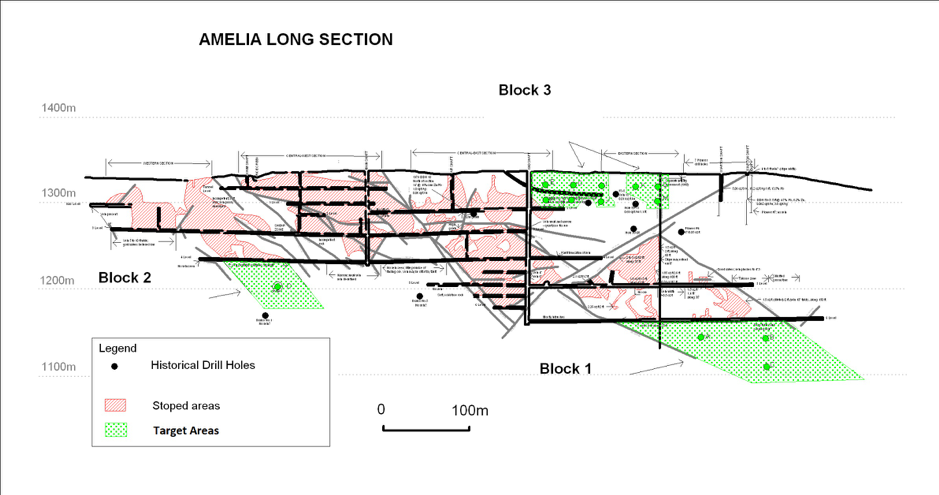